A trend is a general direction of the market is taking during a specified period of time.

Trend analysis is a widespread practice of collecting information and attempting to spot a pattern. In general, it involves gathering data from multiple periods and plotting the collected information on the horizontal line with the objective of finding actionable patterns from the given information. In Finance, Trend Analysis is used for Technical analysis and Accounting analysis of stocks.

An uptrend or bull market is when financial markets and assets – as with the broader economy level – move in the upward directions and keep increasing prices of the stock or the assets or even the size of the economy over the period. It is a time of booming where jobs get created, the economy moves into a positive market, and sentiments in the markets are favorable, and the investment cycle has started.

A downtrend or bear market is when financial markets and asset prices – as with the broader economy level – move in the downward direction and prices of the stock or the assets or even the size of the economy keep on decreasing over time. It is the time when companies shut down the operation or shrink the production due to a slump in sales. Jobs are lost, and asset prices start declining, sentiment in the market is not favorable for further investment, investors run for the haven of the investment.

Many different techniques are used for trend analysis of stocks. This Technical Analysis Application (the App) identifies trends in various timeframes using pivot points (a.k.a. the peak-and-trough) analysis.

After an uptrend is in place, the subsequent higher peaks and higher troughs confirm the original uptrend. The analyzer gives report on the time and price when the trend is first identified and the number of times the trend is reconfirmed.

Pivot point analysis is also useful in giving an early signal of trend reversal. As a long lasting trend movement enters into a period with no trend, it may be an indication of an end of the bull or bear run. 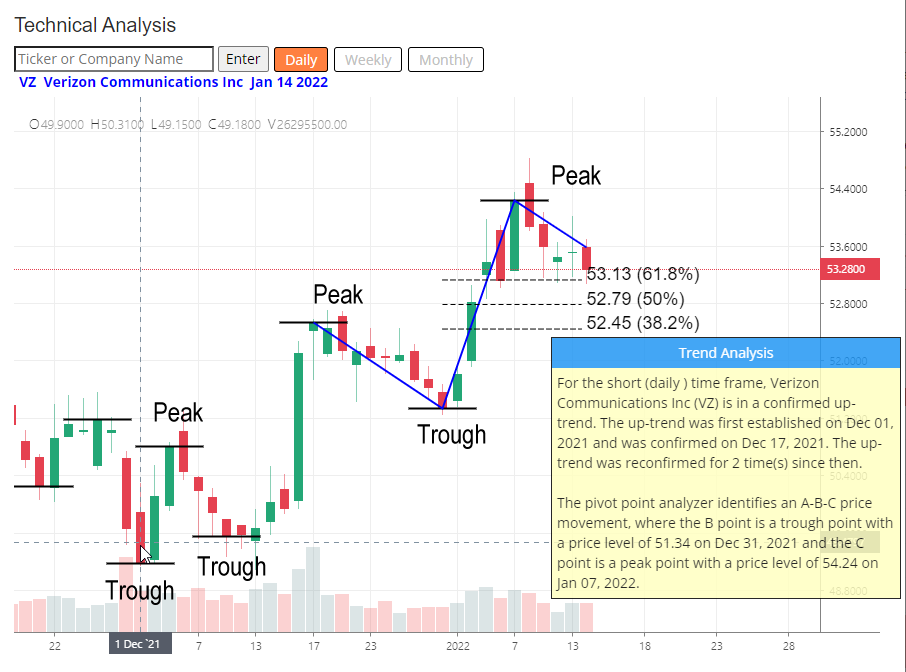 The Analyzer performs pivot point trend analysis in short (daily), medium (weekly) and long (monthly) timeframes. It also performs intraday trend analysis using real time market data when the stock market is open. The trend in one timeframe may or may not agree with the trend shown in another timeframe. When they move in the same direction, it shows high confidence level in the underlying trend. If the results contradict one another, it indicates some hesitancy and uncertainty in the movement.

The analysis can apply on stocks, indexes and ETFs.

In addition to trend analysis, the App also calculates Fibonacci retracement levels and shows them on the last two pivot points. Fibonacci results may not show if the pivot points do not appear to form significant pricing reversal points.